The Patron of the Month Pax 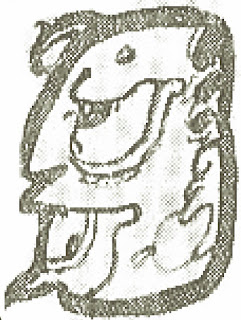 The Patron for the Maya month of PAX is not well understood but he has a wide distribution in Classic Maya iconography and writing. The god is the anthropomorphic form of the TE’ sign. The TE’ Sign itself has “normal” and “head variant” forms. The normal form of TE’ is composed of two basic parts. The first is a circular bead with one or two circles inscribed within (see the T87 sign in Thompson1962:446). Attached to the circle is an oval–shaped ornament from whose edge juts one or two jagged “teeth.” Inscribed in the oval is a line or a bar on which hangs two or three dots. This line– and–dot–cluster serves as the essential feature of the TE’ glyph and acts as a main sign that labels wood items such as trees, wooden bowls, and canoes. The head variant of the TE’ glyph is the profile or frontal portrait of a human face missing a lower jaw. The head displays a pair of large crossed eyes (like those of the Sun God), a cruller motif running under the eye socket, and a disembodied jaguar paw above the ear. From its jawless mouth dangle root–like protrusions. This face is a portrait of the very same head that inhabits the trunks of many trees painted on Classic vases (see Kerr vases K1226 and K4013). The TE’ faces on these trees can sometimes show an oval “jade/celt” T24 sign (Thompson 1962:445) emblazoned on the forehead or a pierced nose with an “AJAW” bead for a nose jewel. The mouth of the TE’ head contains either the T712 sign or root–like tendrils. In every instance as a full tree, the lower jaw of the TE’ mouth is below ground level, a fact that argues that the substance trailing from the mouth represents roots or tubers of some sort.