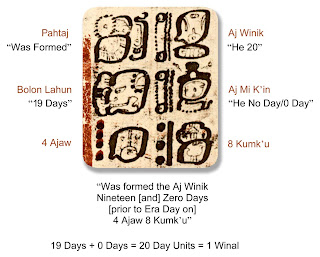 Two of the “Serpent Number” pages of the Dresden Codex hold parallel passages describing creation events shortly before the start of the current era on 13.0.0.0.0 4 Ajaw 8 Kumk’u (August 13, 3114 BC). Specifically, they record the creation of the Winal–the number twenty (see above figure for the passage on page 61). Scribes reference the Winal’s “birth” with the passage pataj ajwinik, “was formed twenty.” The Winal’s birth is then followed by a short numerical count of twenty days that falls directly before 4 Ajaw 8 Kumk’u. This count of twenty days is expressed by the numbers “19 and 0” written side–by–side. The birth of the Winal, followed by a count of twenty days prior to creation day shares a one–to–one correspondence with a similar pre–era event as recorded in the Post–Conquest writings of the Chilam Balam of Chumayel from the Yucatán. This strong correspondence between the Dresden and the Chumayel leaves little doubt that the Winal episode told on the Serpent Number pages serves as the antecedent to the Chumayel text, and thereby shows that a core mythos of Maya cosmology survived intact in Post–Conquest Yucatán despite the ravages and religious suppression of the European Conquest.
Works Cited
Roys Ralph L.
1967 The Book of the Chilam Balam of Chumayel. Pp 229. The Civilization of the American Indian Series. Oklahoma: Univiversity of Oklahoma Press.