Back from a long break after completing my PhD thesis, I thought I would start things off by featuring a list over the next few months of several Maya God profiles and include some new readings and interpretations. A short commentary on each god will be given along with its “activity profile” that tries to ascertain the identity of the god and its particular duties. The commentaries are by no means a complete or final word on the nature of each god and are only meant to serve as referential descriptions. Their profiles will no doubt change and expand in the coming years with each new investigation as their activities are mapped across Maya myth, ritual and art. I am starting off with an enigmatic set of Gods nicked-named the “Paddler Gods”.

The “Paddler Gods” first identified by Mathews (2001:394) are paired deities seen often ferrying gods in a dugout canoe. The portrait heads of each aged god bear wrinkled jowls, jutting toothless jaws. The “Jaguar Paddler” displays the ear, canine and spots of a jaguar and the “Stingray Paddler” wears a pierced bone (stingray spine) through the septum of his nose (Mathews 2001:394). Variant logographs night (AK’AB) and day (K’IN) substitute for their respective names (Villela 1991) revealing their dualistic nature representing night and day. Their role as paddlers are best known from Tikal Burial 116 bones MT38a and MT38b that show them at the bow and stern of a boat transporting a deceased Maize god through the underworld waters (Stone and Zender 2011:51). Yet, they are also depicted on various ceramics as the boatmen who carry the Maize God to his place of rebirth (Quenon and Le Fort1997).
As Jimbal Stela 1 and Ixlu Stela 2 attest,  MUYAL cloud scrolls coil around these gods as they float above rulers performing various rites; Jimbal Stela 1 reinforces this cloud-rain association by adding to their appellatives the title of the rain god NAH JO’ CHAN CHAAK; in some cases the “Paddler Gods” might perform possible rites of “bathing” (AT) (Stuart et al. 1999). 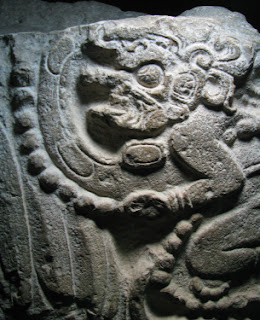 Finally on Quirigua Zoomorph G, East side (N2) the “Paddler Gods” carry the MUYAL-li cloud logograph (a neat head variant of the sign) in their title reinforcing the cloud/mist connection.

On era day 13.0.0.0.0 4 Ajaw 8 Kumk'u, these gods are related to three actions: Quirigua Stela C records that they erect the first of three stones in a sacred locale named NAH JO’ CHAN “JAGUAR THRONE”; Piedras Negras Altar 1 associates them directly to the “changing of the altar/pedestal” event; while “Tila” Stela A relates the pair to a possible “bathing” event.

Villela, Khristaan D
1991 Early Notices on the Maya Paddler Gods. In: Texas Notes on Precolumbian Art, Writing, and Culture, 17, University of Texas at Austin. Austin : Center of the History and Art of Ancient American Culture.
Posted by Carl D. Callaway at 6:51 PM