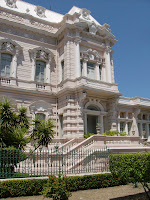 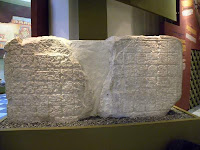 Well I made it to the Capital of Yucatan! Merida has a host of wonderful museums, not the least of which is the Palacio Canton- a pink and white marble palace (built around 1900) that houses many of Yucatan's finest archaeological treasures, not the least of which is the inscribed Panel 1 from Chichen Itza's Caracol-a stellar observatory with a spiral staircase and observational windows and a building that is a testament to the pinnacle of Maya Astronomy.

So the morning after I arrived (Palm Sunday-the streets were filled with processions of waving palms, song and dance), I walked the 10 blocks to the (it felt like 20) and was allowed to take many pictures of all monuments on display. Frustratingly, most of the monuments and artifacts are not labeled telling of their origins, but fortunately I knew most of them. Panel 1 from the Caracol is displayed in dim light and in the open air without protective glass which makes photographing it a lot easier. I asked if I could use my portable LED light to cross light while took photos and of course they said no. Regardless, I was great to be so very close to such an important inscription and allowed to photograph it at hi resolution. It had sustained a lot of damage since it was recovered in the 1930's with many chips, gouges and scrapes.

Why am I so interested in this monument? Well, it records one of the many Era Day inscriptions (and in reversed order at that!) in connection to the supposed founding of the Caracol. The stela also contains the last known inscriptions of one of Chichen's most prominent rulers that of the great K’ahk’-u-Pakal. It describes many doings of this ruler toward the end of his life and in connection with the 17th TUUN of K’ATUN 1 AJAW (beginning on 10.2.17.0.0. 13 AJAW 18 YAXK’IN and closing on 10.3.0.0.0. 1 AJAW 3 YAXK’IN or circa 886-889 AD). From the good work by other epigraphers such as Erik Boot and Alexander Voss, we can postulate that the Caracol was a building related to the divination and that the Itza B’olon K’awiil was the orator and the prognosticator of the Tz’ikinal (a name for the Caracol?) that had the function to announce and proclaim the prognostication for the year based on astronomical observations. Okay so what does all this mean for my work? Well, when the Caracol was built and Panel 1 dedicated, scribes tied the buildings celebration to not only the life of K’ahk’-u-Pakal but also to the beginning of time and the first day of the Current Era, the so called “zero date” of the Maya calendar. Which makes a lot of sense because the Era date 13.0.0.0.0. 4 AJAW 8 KUMK'U served as the initial base date for almost all Maya astronomical calculations as is exemplified so prominently in the Maya book known today as the Dresden Codex.

Needless to say I took a gazillion shots of everything. Its was then well into the afternoon and intensely hot, I made it back to the hotel soaking wet and exhausted yet happy with my cache of new photos.