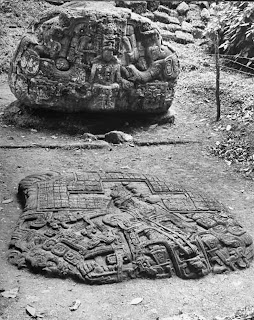 Currently, I am on a 5 month research tour of the US, Mexico and Guatemala in search of Maya Era Day Inscriptions. This project is part of my doctoral research at La Trobe University, Melbourne Australia. The core of my research centers on the analysis and interpretation of hieroglyphic texts and archaeological data pertaining to ancient Maya origin mythology from Classic Period (250-900 AD). It investigates those inscriptions that tell of the origin of the cosmos and the birth of the ancient Maya world on Era Day that occurred on August 13, 3114 BC. Previous attempts to organize Maya cosmology have failed to include all known Era Day inscriptions. Consequently, there is no comprehensive overview of actions, gods and place names relating to the cosmogonic act. My research will present and examine all known Era Day inscriptions for a complete analysis and I hope to relate these findings to the rich imagery on the temple walls and artifacts on which they were written.

Vital to the project is the photographing, drawing and cataloguing of all hieroglyphic passages relating to Era Day. Logistically this is quite a challenge since texts and monuments are scattered in site museums, archives and private collections all over North and Central America. My initial survey revealed that of the thirty nine known Era Day passages, nineteen of the inscriptions and associated monuments need to be photographed and drawn. Previously, these Era Day texts have not been properly documented so as to render accurate drawings for translation. It will be my task to photograph them at night (with a raking light source) to bring out surface details not discernable in the daylight hours. The new photos will then aid in making new drawings. Archival research is equally vital. My findings have uncovered the locations of several key photos and casts of texts made in the late 19th and early 20th centuries that are indispensable to the new translations. These materials are distributed in libraries and museums in the United States, Mexico, and Guatemala.

First up on the agenda is, the San Diego Museum of Man that has on display a cast-replica of Guatemala's, Quirigua Zoomorph P. This monument is read in tandem with its companion altar (called Altar P') that lay directly in front of it. Altar P’ and Zoomorph P also are related in time in that they both record the same initial Long Count date of 9.18.5.0.0. 4 AJAW 13 KEH (September 15, 795 AD), so they were both dedicated on the same day by a ruler known as "Sky Xul". Both are intricately carved with imagery and inscriptions. The attached figure (by Dmitri Kessel, May 1965, Life Magazine) shows both Zoomorph P and its Altar P' together on site. The two works invoke a similar earth based related iconography; Altar P' displays a masked, anthropomorphic figure leaping out of, or falling into, a giant chasm in the earth that is supported on the back of a giant bird while Zoomorph P displays a biciphalic creature whose back supports a giant mountain "WITZ" mask- out of one end emerges a seated human figure from a gaping maw while the opposite end displays a giant mask of the Principle Bird Deity.

I hadn't heard the term Era Day before. The beginning of our era?
I just Googled 'era day'. Google needs an education on this meaning - I think I'll do a blog post about it.
Your website is great, btw.

Thanks for your Question- its a good one. Era Day is fairly new terminology. The day 13.0.0.0.0. 4 AJAW 8 KUMK’U has many aliases throughout Maya scholarship. Each term infers a different set of ideas or concepts that may or may not be relevant. This plethora of names include: “zero mark” (Seler), “point of departure” and “zero point” (Förstemann), “starting point of Maya chronology” (Morley), “zero date” (Thompson), “the beginning of Maya time” (Stuart), “start date,” “day zero” and “creation day” (Aveni). The term “creation day” especially gets tossed around quite liberally in recent academic circles―the term implies that there was some generative action tied to the day. The question naturally arises, to what significance did the ancient Maya attribute to the day. Did they see it as embodying a concept of zero, the start of time, or did it witness some cosomogonic act from which our world emerged?
I employ the more neutral term of Era Day/Date to label the 13.0.0.0.0. 4 AJAW 8 KUMK’U date. This term is based on the observation that the Maya scribes viewed the day as marking the end of one epoch and start of a new (although the time span of what constituted a full calendar era is still an open question). Support for the Era Day designation comes from the inscriptions themselves which describe that at this point in time 3114 years ago, as the day in which a cycle 13 B’AKTUNS came to a close (literally “finished”). Scribes also used this date as a primary benchmark to calculate the Long Count and other calendar cycles.
Monuments containing Era Date fully expressed in Long Count notation occurs at two sites: Quirgua Stela C and Coba Stela 1. These two stela record Era Day with a Long Count containing 13 B’AKTUNS and the remaining lower periods (K’ATUN, TUN, WINAL and K’IN) all have zero as a coefficients. In Arabic notation, this Long Count and associated day name are expressed as 13.0.0.0.0. 4 AJAW 8 KUMK’U.